International Women’s Day: women in the workforce. There’s no better time to reflect on women in the workforce than on this 8th March, International Women’s Day. According to the New Hampshire Women’s Foundation, women are responsible for a whopping 83% of all consumer purchases, 89% of new bank accounts, 80% of healthcare decisions and 60% of car purchases in the United States. Fair to say that women play an important role in US households.

In corporations however, women still play lesser roles than men. There are numerous reasons for that –you’ll find some of them in the text below- but being less capable surely isn’t one of them. Many more progressive leaders now not only see the value of women at management and C-suite levels, but also advocate gender equality. The rate at which that equality is installing itself in the corporate world however, fell sharply the past year. Instead of taking until 2095 as predicted in 2014, gender parity won’t be achieved globally before the year 2133, says the World Economic Forum.

Strange, seeing as how having women in significant management positions gives a company a talent advantage that few others have (for now). McKinsey & Company along with The WallStreet Journal researched the impact of women on the US Economy and they were frank about their findings: “women have fueled the growth of the US economy and its largest corporations.” In a follow-up study with the cooperation of 60 Fortune 500 companies, they tried to map talent pipelines and gender-diversity practices. They found that a large number of women choose for staff roles or simply don’t get any further than middle management. Others leave the company before it can address their issues. While 33% of women make it to middle management, only 5% of those female middle managers make it to vice president and higher. In the European Union, only 17% of board members in the largest publicly listed organizations are women and women make up a mere 4% of chairs of boards, according to the European Commission. 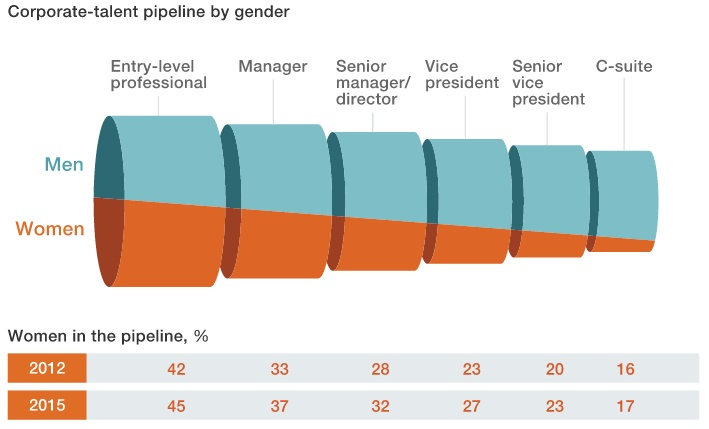 Helping women, particularly during their child raising years, would help a great deal, the Study says. Furthermore, top management should be fully committed to gender equality in the workforce, as well as measuring every step of the process and adjust it when necessary.

What exactly is the benefit of gender equality? The answer is pretty obvious, especially for those who embrace modern day marketing- and sales paradigms. It is the diversity of thought, brought along by adding more women to important company roles, that offers better customer insights. Another obvious benefit, is simply having a larger talent pool to choose employees from. If you want to attain the best possible workforce, you can’t afford to disregard roughly 50% of the population based on their gender –even unconsciously.

So why will it take over a hundred years to achieve gender parity? There are multiple endogenous and exogenous factors that obstruct its progress. First of all, one important exogenous reason is unconscious bias. Numerous studies have shown that men are being valued more for the exact same work as women, in terms of both grading and payment. It is a result of how women are being examined, since their competences are constantly being compared to men’s. On top of that, leaders expect executives to show male behavior, simply because nearly all successful executives they’ve worked with in the past showed that behavior. To state the obvious: showing male behavior does not make one successful, it’s just that close to all executives in history were men who were encouraged to behave that way.

Secondly, there is such a thing as ‘perception gaps’ between both genders. Women for instance, feel that they have much more difficulty to achieve top management positions, while men on the other hand believe that it is equally difficult for both genders. Thirdly, women are less encouraged to become leaders during their childhoods and early careers. Instead of supporting a young woman who aspires a high level management job, family, friends and colleagues often ask how she’ll combine work and raising children in the future.

Women also prefer to work part-time, which is next to impossible at the higher management positions. In Europe, 32% of women work part-time, compared to only 8% of men. When women are offered a salary increase, they often prefer to work less hours and maintain their nominal income. Men on the other hand, are motivated to work even more hours due to the raise. The reason lies in the oftentimes difficult combination of work and family responsibilities. While men are usually just primary breadwinners, nearly fifty percent of surveyed women by McKinsey stated that they’re both primary breadwinners and primary caregivers.

More than men, women hold themselves back too. When an opportunity for a promotion arises, few women actually grab it. Additionally, more women than men opt for support roles. Joining the C-suite, is something few women aspire to. 36% of men would join the executive level if they could, while only 18% of women would. When already successful women were asked the same question, 41% said they’d like a seat at the table.

KPMG tried to figure out what exactly is holding women back. In an extensive report, they explain that confidence is the key to success and that’s where it goes wrong. Women apparently have a lack of confidence, that’s detrimental to their career advancement.
67% of the women surveyed stated that they need more support building confidence.

Next to a lack of confidence, there’s a lack of female role models as well. 67% of women nonetheless say that they learned their most important leadership lessons from women and 82% of (professional) women believe networking with female leaders will get them ahead in their career. One of the more remarkable findings of the KPMG study, is that women value receiving praise from colleagues and leaders over raises in salary and promotions.

We at Herculean fully understand the value of adding women to the workforce and high level management positions, with one third of our board being female. Next to that, we’re proud to be able to say that on average, 39% of all participants at the different Hercules Trophies over the years, were women. We’re trying hard to get that percentage up to 45%, and so we encourage all of you to show your bosses your true grit and what you’re worth! 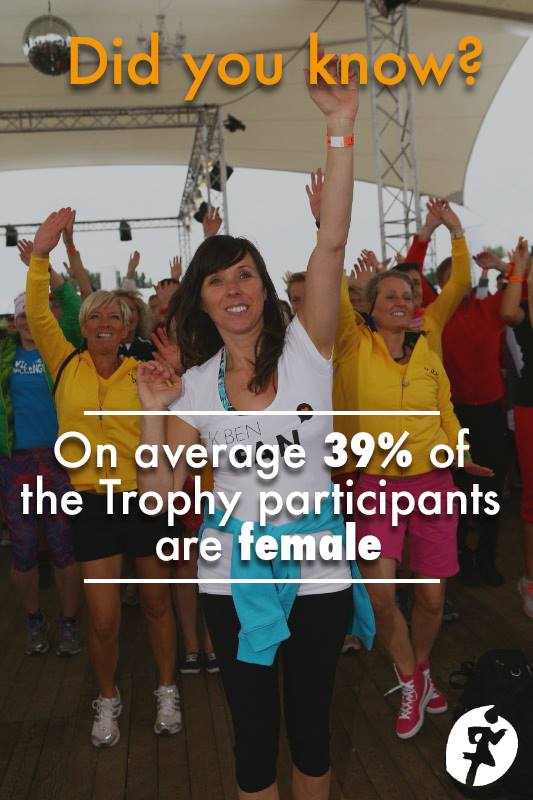 We’re big fans of women and positive discrimination. That’s why as of this year, for the first time ever, we’ll be organizing the Flair Games in Belgium exclusively for ladies, at five different locations and dates. It’s a tailor made event for women, with special labors, goodie bags, a live DJ and much more. Men needn’t be jealous, for they are very much welcome to join in all the fun as a supporter.